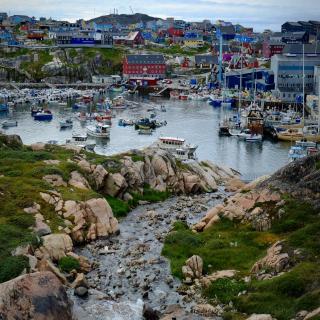 QGreenland aims to serve the needs of researchers, educators, and Greenland residents, like those in the coastal community of Ilulissat.

QGreenland, an open-source mapping tool that aids in the discovery and teaching about Greenland, is now available from the National Snow and Ice Data Center (NSIDC) and its partners. This free geographic information systems (GIS) tool allows for the exploration of data on Greenland’s ocean, land, ice sheet, biology, communities and more, and can be used by a diverse range of users to examine the data available about Greenland’s landscape, ecosystem and communities. QGreenland is the first GIS data-viewing tool of its kind to focus on Greenland.

“It can be a challenge for educators, researchers and community members to begin to explore Greenland data because it is widely dispersed and can be hard to bring together,” said Twila Moon, principal investigator of the project and research scientist at NSIDC. “The QGreenland team has already done this hard work on behalf of users and the result is a fun and easy-to-use tool for anyone to access data about nearly anything in Greenland from birds and ice sheet changes to roads and community maps.” For example, high-resolution satellite images available on QGreenland can reveal small details about the Greenland Ice Sheet, while free online street maps help to navigate local communities.

A diverse team—led by Moon, developers and educators at NSIDC and CIRES, and an international editorial board—developed QGreenland to inspire new Greenland discoveries, assist researchers in planning field work and analyzing data, and serve educators, community managers and policymakers. It runs on QGIS software, which is free and available for Mac, Windows and Linux. QGreenland provides research data from a variety of disciplines, including glaciology, biology, environmental management and hydrology. The release on February 24 marks the first version designed for public use. The QGreenland team plans at least two more annual releases as they receive feedback from a user community of researchers, educators, decision makers and anyone else interested in Greenland.

Within QGreenland, users can access, download, add to and conduct analyses on data, with or without an Internet connection. Users can create visualizations and maps of Greenland, and no previous experience with QGIS software is required to use the tool; version 1.0 comes with a full user guide to allow anyone who is interested to access and explore the available data.

“QGreenland is making the sum of the vast spatial data productions of the international research community easily available to researchers and educators in Greenland and internationally,” said QGreenland editorial board member Karl Zinglersen, GIS manager and database expert at the Greenland Institute for Natural Resources in Nuuk. “In Greenland, people are often asking, ‘how can we find the data the foreign scientists bring back from Greenland?’ Now we can directly utilize much of it.”

NSIDC leads development of QGreenland and collaborates with researchers and developers from institutions in Greenland, Denmark, Norway and the U.S., as well as editorial board members representing expertise from around the world. QGreenland is modeled after the Norwegian Polar Institute’s Quantartica tool and funded by the National Science Foundation’s EarthCube program. QGreenland has also partnered with the National Science Foundation Arctic Data Center to create a unique data portal that highlights all of the Greenland-focused geospatial data hosted by the Arctic Data Center.